Bud Blumenthal is an American-born choreographer creating works in Europe since 1991.

He settled in Bruxelles in 1988 to become part of the Plan K Company of Frédéric Flamand, performing in “Scanlines”, “If Pyramids Were Square” and “The Fall of Icarus”and danced with Michèle Noiret in “L’Espace Oblique”, “Tollund”, and “In Between”.

His background is eclectic – he practiced sport intensively before exploring the techniques of yoga, tai chi chuan and improvised dance. His encounter with Michèle Noiret marked the beginning of his choreographic career with the collaborative duet Louisiana Breakfast (1991).

Since his appearance at Avignon in 2000, with 24 Haïkus (solo, 1996) and Noeud de Sable (duet, 1997), and with Les Entrailles de Narcisse in the Festival des Hivernales 2001, his choreographic works gained attention for his way of conjugating the poetry and fluidity of movement with new technology. This approach is used in River Tryptych, which brings together the masculin duet Rivermen (1999), the solo Les Entrailles de Narcisse (2001) and the masculine trio Red Cliff (2002) that was supported by the Forum, Scène conventionné of Blanc-Mesnil (France) and featured a motorised, floating screen.

In 2002, in a tribute to the American dance and technology pioneer Loïe Fuller, he created Phantom Limbic for the Ballet de Lorraine in Nancy that features computer-generated images and special effects. Beyond these investigations, he sometimes explores stylistic hybridisation such as in Spledge (2000, mixing hip hop, club and contemporary) or with African dance in the duo Groundscape (for the Festival Africalia 2003).

In 2004, for the Charleroi/Danses Biennal, Bud Blumenthal presented an ambitious production based on Homer’s Odysseus and James Joyce’s novel: Les Reflets d’Ulysse. It made use of extensive technological systems such as the “active shadow” a video projector whose image can be moved and pointed at will. This work was the subject of preliminary gestural and technological research that led to the solo Les Sentiers d’Ulysse. Another invention “the active whisper” that moved and directed sound beams was made for the installation Ulysses Roaming in 2005 for the festival Equilibrio in Rome. In 2006 the solo Po’s Vague combined computer animation and wearable sound projection.

In 2007, he created the dance and music quartet Standing Wave with music by Walter Hus. Featuring a live string quartet it made use of monumental computer graphics, wearable sound projectors, controlled sound beams and motorised floating props . The same year, with Hayo David he made the male duet DoWhileLoop that later became the evening-length DoWhileLoopS.

With the ongoing project Into The Riff begun in 2008, he explores the mixture of live improvised dance and music in the company of Garrett List and musicians of The Riffing Society. 2009 sees the creation of Beatrix//Beatrice, female duo combining voice, movement and technology to the music George De Decker.

It is also this year that Bud Blumenthal launches the project DANCERS!, website library and interactive monumental installation honoring dancers with a vast collection of precisely-filmed 2-minute solos by professional dancers of all styles and techniques.

In 2011, at the invitation of choreographer Manuela Nogales of Seville, they create Dentro por Fuera, Fuera por Dentro, a duet with live viola and electronic music.

On a spiritual and physical quest, in 2014 Bud Blumenthal and a crew of 8 technologists invent an immersive interactive stage performance Perfectiøn. Using 3D volumetric cameras, both on stage and suspended as well as wrist-band motion detectors, the project breaks limits in interactive 3D animation and computerised scenic control. The knowledge and methods acquired and developed form the basis of the techno/ecological group work Leaves of Grass. 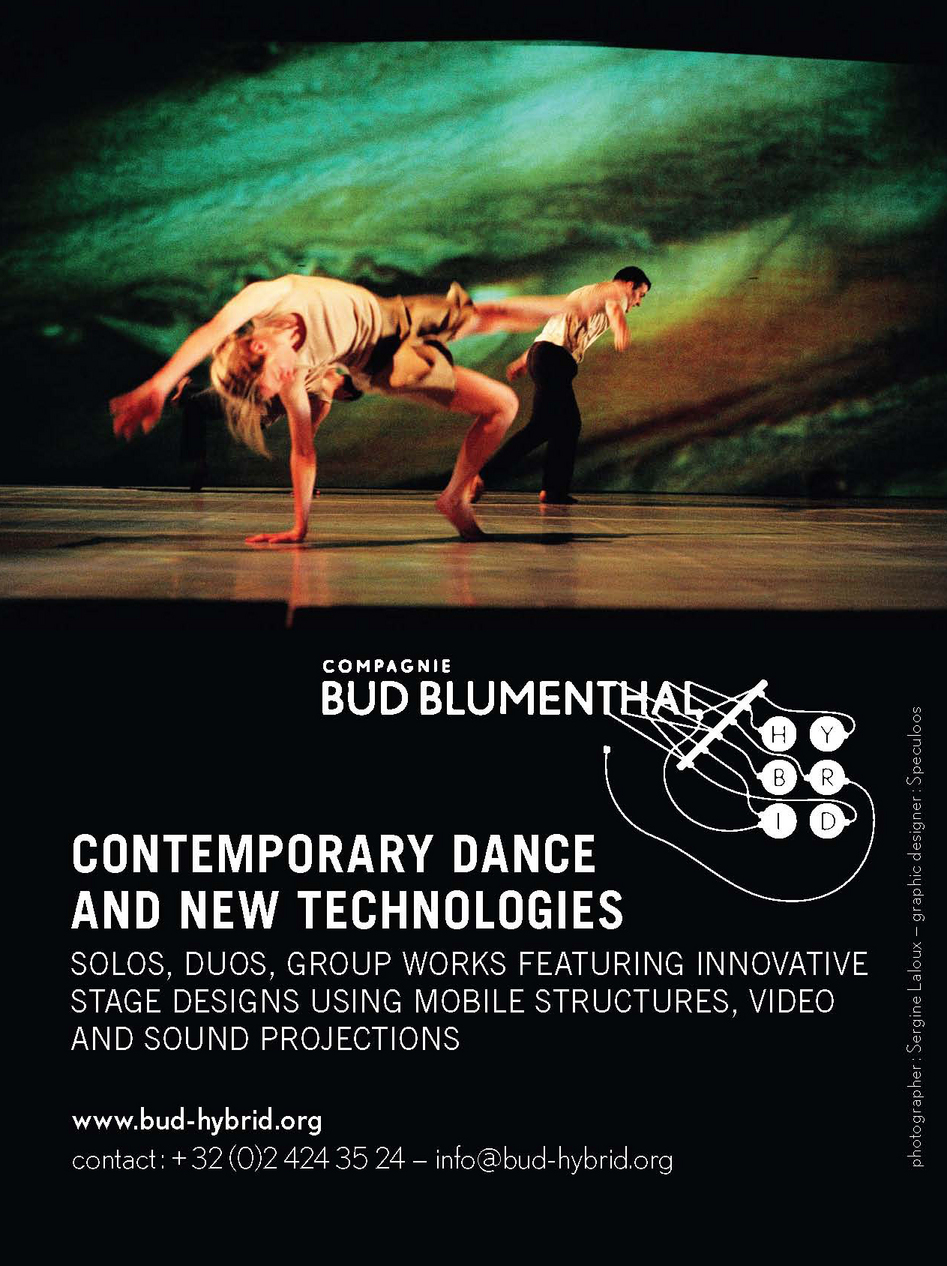